In our web site there is a big list of Australian place names where we have sent pups all over every state & both Aussie territories, virtually to anywhere. It is getting harder to find somewhere in Australia that we have not sent a pup to.

Anywhere in Australia is fairly easy for us to arrange to send a pup to : for instance, in Queensland, all the way up the coast, we have flown pups to Coolangatta, Brisbane, Maroochydore, Maryborough, Hervey Bay, Bundaburg, Gladstone, Rockhampton, Mackay, Proserpine, Townsville, Cairns, Cooktown,Weipa, and to Thursday Island.

Inland Queensland is a little harder, but we have sent pups to many distant Queensland places, including to :

Similarly, we can list places scattered equally broadly throughout every state and both mainland territories of Australia. We could write some fascinating chapters about so many amazingly interesting people and their immensely varied places. Here are some snippets of general interest on the theme of actually sending our pups anywhere :

Our pups really do adapt to extremes in hell hot climate such as Marble Bar in WA, which holds the record of 160 consecutive days where the daily temperature exceeded 100 degrees on the old scale. Or to Tennant Creek, NT, or to Cloncurry & Julia Creek in Qld where the official heat record has gone close to 130 degrees on that same old scale. Very tough on people, especially babies, if no air-conditioning... but especially tough on dogs in those extremes of the summer. A fraction of our destination list includes Innamincka, Andamooka, Coober Pedy, Sandstone, Wiluna, Leonora, Tom Price, Newman, Halls Creek, Katanning, Boyup Brook, Many Peaks, Savage River, Zeehan, Cygnet, Sorrell, Bicheno, Whitemark, Lightning Ridge, Tibooburra, Wilcannia, Louth, Groote Eylandt, Maningrida, Gove, Jabiru, East Alligator, Alpha, Adavale, Dingo, Banana, and Sarina. These days we send most pups via Qantas and occasionally via other airlines. Sometimes with the help of airline travellers as their "excess baggage".

Our dogs have occasionally travelled Australia wide with specialist horse transport firms, such as Darwin Horse Floats, regularly operating Melbourne-Adelaide Darwin. Also with animal transport experts running fortnightly from Sydney-Adelaide-Melbourne-Perth. In June 09 we sent a seven months old pup to Kalgoorlie in W.A. with Notable, travelling with race-horses and alpacas. No hire cage was needed. His name is "Happy", and he now has his own lounge room chair at night.

Some of our clients have become grey nomads, continually travelling Australia with their dog. Another very interesting client, is "Circle B", with a red heeler, endlessly travels Australia to many events such as rodeos, shows, and events, also to station properties, with a semi trailer set up as a mobile supplier of station apparel and saddlery.

Internationally, with horse transportation, we have sent heelers with charter flights of racehorses to Murtie Brothers Stables, operating in Kentucky, California, Florida,New York, Australia and Argentina.

Our pups have adapted to winter freezing climates : such as the extreme cold in the Swiss Alps in Switzerland, also to freezing Calgary, Canada, where a Winter Olympic Games were held. Or to cold Invercargill, NZ. Or to cold Scotland. One black kelpie lives at Mount Beauty, Vic. In winter she goes to work with her owner, travelling the last few kms running beside a snow-mobile in the snow down to minus eight degrees Celsius, for about 4 kms up to the Falls Creek Ski Lodge's ski-lift maintenance workshops.

Pups have gone in strange ways to very difficult locations :Such as the four kelpies on a bulk sheep freighter to Saudi Arabia. And a heeler to Israel to work in an underground high security sniper-proofed dairy.

Ours were the first heelers & kelpies ever sent to Nicaragua, in Central America. Four pups as workers with the local sheep species. Later, the same two kelpies and two heelers, as adult dogs, were taken to Spain, where they have since been bred from. They are now also breeding in France & in Holland. Other pups have been sent to Fiji. To the United States includes to Hawaii, Arizona, Mississippi, South Carolina, and to Pennsylvania, In Canada to Alberta & to British Colombia.

Two pups went on a US Army-Air Force air freighter from Pine Gap, NT, to Houston, then on to San Antonio in Texas.

In the Aussie Dog book that Alex is writing, will be many fascinating stories, about many pups we have sent. 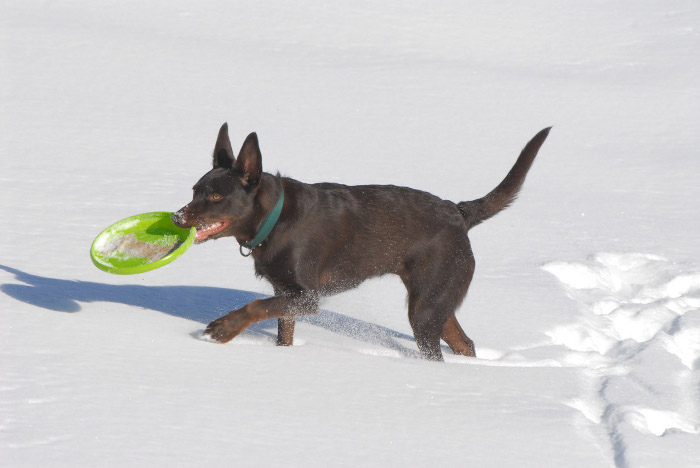